In human anatomy, the elbow is an upper-body joint that easily becomes stiff following trauma. In an attempt to prevent the occurrence of such complications, articulated elbow braces and wraps must be used in the rehabilitation phase to enable movement, which was impossible to do with the splints or casts that were commonly used in the past years.

A specific characteristic of this type of medical brace is that it ensures articular extension while keeping the elbow protected from various physical stresses and prevents the degrees of flexion-extension by restricting articular excursion activities, which are considered to be dangerous. 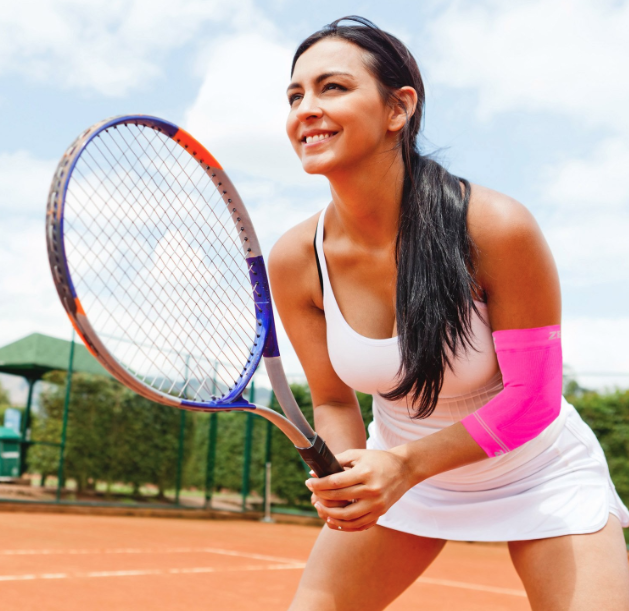 Also, through special handles that can be applied to elbow braces, it is possible to prevent undesired degrees of prono-supination. Some braces can exert distractive tension on the retracted soft tissues, which helps to increase the articular extension in patients affected by elbow stiffness.

The elbow straps are basically utilized in order to lessen the increased pressure on overworked muscles. The strap functions similarly to a massage that loosens the muscles and relieves stress. Not only does it help in removing fatigue in your muscles but it also relieves you of the pain that you are encountering.

Use of Elbow Braces In Common Conditions

The use of elbow braces is commonly indicated in traumatology, as well as for the treatment of stiffness. In both situations, elbow braces can be used both as a conservative treatment and as a post-operative rehabilitation treatment.

However, if you frequently use hand tools or even a computer keyboard, the tendon on the outer side of your elbow will start to undergo inflammation. This is when tennis elbow starts to develop slightly, and the pain may be negligible. It is when further movement and tension makes tears in the tendon attaching the bone and the forearm muscles that the pain changes from acute to chronic.

The elbow brace helps in decreasing these risks and prevent further wear and tear by decreasing pressure on the part of the tendon and also dispersing contraction forces throughout the forearm to recover the damage.

There are two cases of usage when it comes to post-operative care: after bone fixation and after soft tissue release. Doctors will always recommend the use of elbow braces after the patient underwent surgical bone fixation – especially for serious injuries such as distal humeral, radius head, and coronoid process fractures. Meanwhile, for the case of soft tissue release, the elbow brace is designed to limit dangerous movements for joint stability, which allows early active and passive movement and the application of distraction from the soft tissues. This is to maintain the range of movement achieved in the operating room.

This physical ailment can be treated with the use of elbow brace alone without requiring soft tissue release, with the aim of exerting a progressive distraction force on the retracted soft tissues of the elbow, lengthening them and helping to increase the range of movement on a subsequent basis. 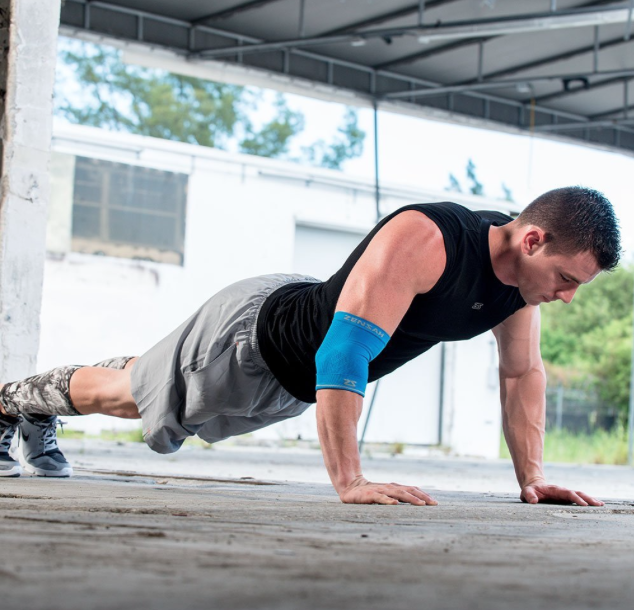 Medical experts can even tell that there is no brace classification to facilitate communication among health professionals who specialize in elbow rehabilitation: orthopedic surgeons, physiatrists, technicians, and physical therapists.

As clinical conditions and indications for elbow braces are very different, it is easy to know and understand why they come in a wide range of shapes, sizes and types. 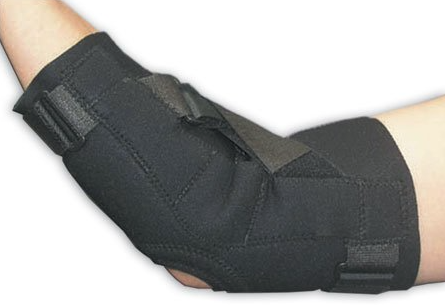 These include slings, immobilizers, braces, pads, sleeves and wraps. They are all generally utilized to hold the elbow and arm in a stationary position, giving comfortable support and protection to keep the arm stabilized so that healing can occur more rapidly, and that fractured bones or tendon and bursa surgical repairs can heal properly.

The hinged elbow braces encourage and help restore range of motion at that stage of the recovery process, but also help maintain protection against further injury. 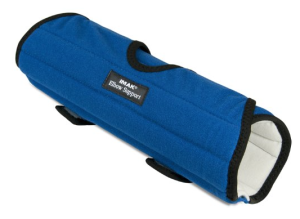 This is the type that can either be a non-articulated or articulated locked brace. Its purpose is mainly to protect the limb by completely restricting its movement and is indicated in the initial phase after trauma or surgery. Early movements are strictly prohibited when using this kind of elbow brace. 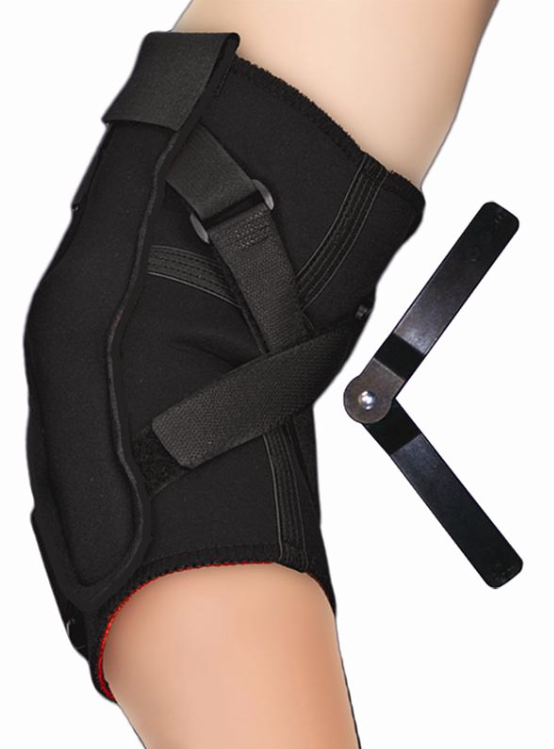 This kind of elbow brace allows a controlled range of movement. With this brace, active and passive movement is allowed as long as it is within the desired range of flexion and extension, while pronation and supination can be controlled by using a special handle that can be attached if necessary.

Restriction braces enable early movement that can be adjusted according to the type of lesion or surgery performed on the patient.

By special mechanisms, mobilization braces can exert distraction forces on the retracted soft tissues and is used to either maintain or increase the elbow range of movement after trauma or surgical operation.

Compression straps are perfect for most common conditions such as golfer’s elbow and tennis elbow, which also include bursitis and tendonitis, as the arm bands can be adjusted to compress the tendons of the forearm. This results in pressure reducing the force transmitted through the tendon, relieving pain.

Compression straps help other repetitive strain injuries such as lateral epicondylitis, which can often cause pain when performing simple twisting movements such as turning a door knob. Compression devices also help protect athletes from injury, or from further injury to an already affected elbow.

The elbow pads are normally configured to slide on to the elbow easily and typically feature extra padding around the elbow for additional protection and comfortable support. Elbow sleeves are similarly designed and often used for milder support to ease pain and inflammation in cubital tunnel syndrome and radial tunnel syndrome.

Elbow wraps provide a milder form of compression support over strapping, but at the same time tend to ease pain almost immediately when worn.

Elbow braces and wraps help injuries recover faster while preventing even more damage to the affected area. They are also better options than medical injections that contain steroids or painkillers which will temporarily relieve some of the inflammation and swelling and the pain around the joint but are not a long-term solution. The brace relaxes and relieves the muscles overall.

A lot of current, modern elbow sleeves are copper elbow braces. Copper is great in encouraging healing, so if your sleeve is lined with this, it could have an almost medicinal effect,

How To Properly Secure An Elbow Brace

Regardless of the use, we must remember that the main purpose of elbow stiffness treatment – whether conservatively or surgically – is to re-establish at least a range of motion between 30 to 130 degrees in flexion-extension, and up to 50 degrees in pronation and 50 degrees in supination. Also, a range of motion helps to constitute the arc movement that permits the most common daily activities. 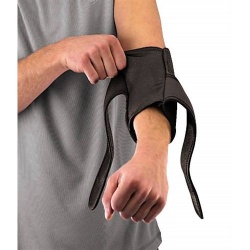 This process is suggested for patients who may have difficulty securing the straps of the elbow brace with their non-dominant arm or have functional limitations in their upper extremities.

How to apply arm slings

Arm slings are often included when you use elbow braces, and this is the final step in the application process.